The Ragdoll is an affectionate, sociable, and intelligent breed that’s fast becoming an American favorite! They are considered kid-friendly and good other pets, the Ragdoll cat breed is a perfect pet for almost any home.

The ragdoll breed is known for its affectionate nature, loving nothing more than to follow its owners around the house, snuggle up with the family, and be cuddled.

Ragdolls are known as the cat breed that thinks they are a dog. They are a very sociable cat breed that will come when called. Ragdolls were originally bred for their outgoing and lovable personalities. 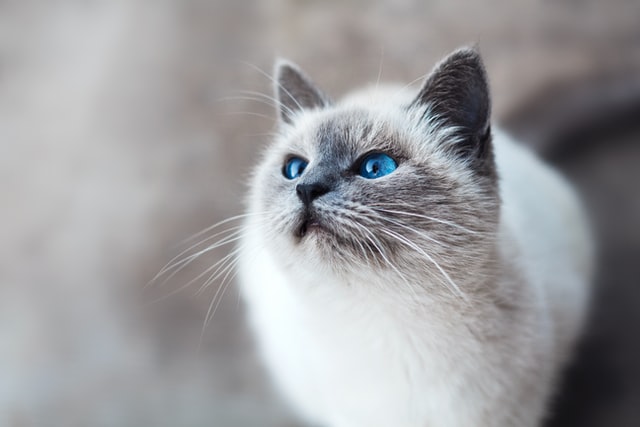 The Ragdoll was first bred in California in the 1960s by a woman named Ann Baker. She developed the breed from an unregistered pedigree that she found loose in her neighborhood, who she thought had the most fantastic temperament.

By breeding this cat, Josephine, with a few different sires, Ann created the Ragdoll breed; so-called as they enjoy cuddles so much they relax completely in your arms when you pick them up.

Ragdoll cats are also remarkably intelligent and have been known to learn tricks such as recall, rollover, and even fetch. They are a great choice for households with children, with some even happy to be pushed around in a pram!

They love company, and many owners choose to adopt two Ragdoll cats together, especially if there is not always a family member or another pet in the house.

Ragdoll cats can be in a variety of colors and patterns, such as blue, chocolate, lilac, red, silver, or cream.

Ragdoll cats all have semi-long, silky fur, long limbs and bodies, short, thick necks, and often distinctive faces with piercing blue eyes. The ragdoll cat breed is often are known to have blue eyes, but they can have a range of eyes colors.

They are a ‘pointed’ breed, meaning their bodies have darker colored fur on the ‘points’ of the body – ears, legs, and tail.

Adopting A Ragdoll Cat From A Breeder Or Rescue

When adopting a Ragdoll, it is recommended to adopt a pug puppy from a Cat Fanciers Association breeder. This will reduce the chance of genetic health issues.

You can also adopt Ragdoll cats from cat rescues or even animal shelters, but pure pedigree ragdoll cats come from a reputable breeder.

Exercise And Nutrition of Ragdoll Cats

Ragdolls are happy to live as indoor cats, in fact, it is often advised not to allow them outside due to the Ragdoll’s lack of ‘street smarts’ and fighting instincts. They are slow to mature and so retain their playful kitten-like nature for up to four years, meaning they will require lots of playtime during this period.

Due to their slow rate of growth, it’s important to feed a Ragdoll at regular intervals throughout the day. These cats love routine so try and keep to a similar daily feeding schedule.

If your ragdoll kitten licks their plate clean, keep refilling it until they leave some. Once your Ragdoll has reached full size at around 4 years old you can restrict food intake to prevent obesity.

Ragdolls are generally a healthy breed but there are a couple of hereditary diseases that had been identified for the breed, as well as conditions that affect long-haired, and indoor cars.

A good safety net for the future is to take out pet insurance early on for your Ragdoll kitten before any conditions show themselves.

Hypertrophic Cardiomyopathy is a form of heart disease which is common in cats and has been found to be hereditary in Ragdolls. The walls of the heart thicken as a result of this condition, which can lead to sudden heart failure or blood clots.

Symptoms may not appear for several years and the effects can be very serious so it’s important you report any changes in behavior – such as loss of appetite, lethargy, aversion to exercise, difficulty breathing – to your vet, and be sure to get regular check-ups.

Your breeder should have had both parents’ DNA tested for the disease, which can help predict if your kitten could develop the disease.

Polycystic Kidney Disease is a life-threatening condition where cysts form on the kidney. These can cause organ failure and unfortunately cannot be removed. Your vet can usually offer medication to minimize the symptoms and delay kidney failure.

Your breeder should have had both parents’ DNA tested for the disease, which can help predict if your kitten could develop the disease.

Ragdolls don’t have an undercoat which means they don’t mat easily. However, as their fur is semi-long it’s important to brush them regularly to prevent tangles which could lead to mats and to spread the natural oils throughout the fur. A grooming session once or twice a week is enough for most Ragdolls.

Indoor cats are more likely to become obese because of lack of exercise and more time spent around snack-dispensing humans. Obesity can lead to a range of health concerns and should be addressed as early as possible. See our page Cat Obesity for more information.