Perfect for families with children or those looking for a watchdog.

Owners of German Shepherds find them to be loyal and trustworthy and note that they make excellent and steadfast companions, especially for children.

A German Shepherd’s intelligence and adaptability are what has led to its use as a reliable search and rescue dog, police dog, or bomb-sniffing military dog.

These working dogs also make great pets. German shepherds are one of the most popular dog breeds in the large breed sector. 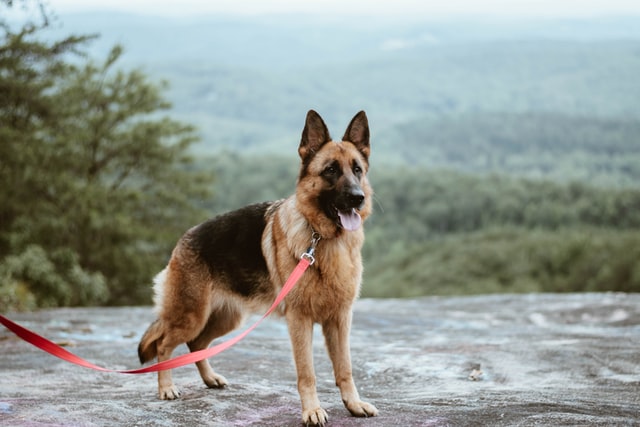 This breed originated in Germany in the latter part of the 19th century. Considered a “young breed”, the German Shepherd was first registered in a breeding society in Germany in 1899.

However, the sudden rise in popularity was squashed in anti-German sentiment after World War II. Since that time, the breed has enjoyed a gradual resurgence and is now the second most registered dog breed in the United States.

German Shepherd dogs are a working breed that originated as a herding dog, but in modern German shepherds are often used as service dogs, bomb-sniffing dogs, and police dogs because of their trainability.

German Shepherds are one of the most intelligent dog breeds. They are smart, agile, high-energy dogs with speed and stealth making them great working dogs or guide dogs.

German shepherds are large dogs with medium-length double coat fur. They are a recognizable breed with a long snout and large ears that stand straight up.

Most commonly the breed standard is black and tan, but they can come in black, white, gray, and a variety of bicolor combos.

German Shepherd dogs can be overly-protective if not handled properly and shouldn’t be left alone for long periods of time, as they can experience anxiety.

They are friendly dogs but often protective, which can come off as aggressive. With obedience training, German shepherds are great dogs to own.

A German shepherd’s love and loyalty are unmatched, making them great family dogs.

Adopting A German Shepherd From A Breeder Or Rescue

When you adopt a purebred German shepherd puppy, it is best to adopt from reputable breeders registered with the American Kennel Club or German Shepherd Dog Club.

You can also find German Shepherd dogs in shelters or German shepherd rescues.

Exercise And Nutrition of German Shepherds

When your German Shepherd reaches adulthood, you should be exercising for two or more hours a day to keep them healthy. They are a large dog breed, so they require a big yard and lots of activity.

It’s a good idea to enroll your German Shepherd in training classes. Not only is it a great exercise for your pup, but regular training from an early age will make them more manageable when they’re fully grown.

German Shepherds need large amounts of protein in their diets. The amount you feed your dog will depend on their age and size. Always read the label or seek advice from your veterinarian if you are unsure.

German Shepherds do have their share of health issues, which is why it’s a good idea to take out dog insurance for your German Shepherd while they’re still a puppy.

Hip dysplasia is common in larger dogs such as German Shepherds, and is an issue that can quickly escalate from minor pain to something more serious. Many dogs will need to undergo corrective hip or elbow surgery for this problem.

German Shepherds are also prone to developing a disease known as Degenerative Myelopathy, which affects the health of the dog’s limbs.

As a progressive disease, this condition can ultimately lead to paralysis in your dog, and they will eventually be unable to support their own bodyweight. Unfortunately, this disease is incurable.

Von Willebrand disease (VWD) is also common in German Shepherds. This disorder is caused by a deficiency of a plasma protein in the blood which enables it to clot. This can cause a dangerous amount of bleeding from even a small injury.

Bloat, otherwise known as gastric dilatation volvulus (GDV), is a very serious, life-threatening condition which can cause the dog’s stomach to twist. The oxygen and blood supply to the organ is then cut off and urgent medical treatment is required.

This low number of digestive enzymes in the bowel mean that the dog can’t digest and absorb food properly. Your veterinarian can prescribe a form of replacement digestive enzymes with can be added to the food, however your dog will need to take these digestive supplements for the remainder of their lifetime.

Haemangiosarcoma is a cancer that occurs in the lining of blood vessels in organs such as the spleen, liver and kidney. This cancer is fast growing so, unfortunately, can spread very quickly throughout your dog’s body.

A variety of different treatments are available, for example immunosuppressive medicines or surgery. This condition can require on-going attention, but most dogs are able to continue life as normal.

The German Shepherd is a medium to large dog at maturity. According to the American Kennel Club, they grow to 22 to 26 inches in height and 50 to 90 pounds in weight. The healthy range varies depending on the dog’s age and gender. Is your German Shepherd puppy growing correctly? Check out the German Shepherd Weight and Growth Chart. 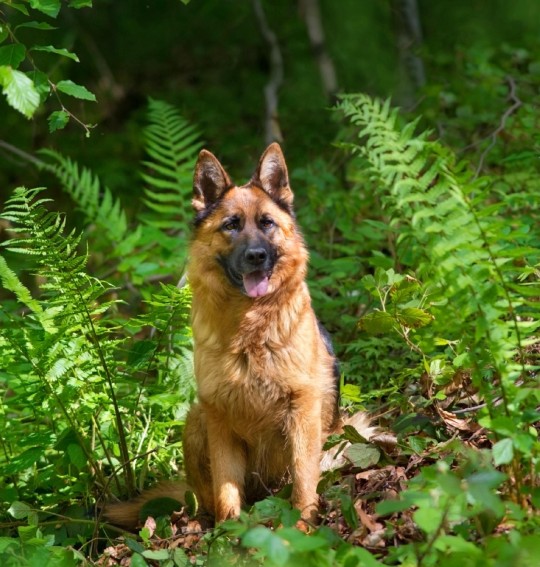